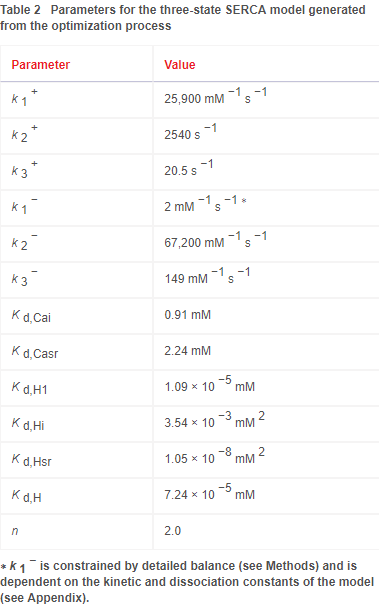 Thermodynamic properties of the model

Simplifying to a two-state model

At neutral pH, the stoichiometry of the counter-transport between Ca2+ and H+ is measured to be 2:2, as in the model

The order and placement of the partial reactions involving MgATP binding was shown to be an important determinant of the ability to fit the data set, where an acceptable fit was achieved only when the MgATP binding step was placed before the first Ca2+ binding step and after the release of Pi

Reversal of the pump

The parameter with the greatest influence in the model is n, the number of H+ that are counter-transported for each Ca2+. Taking together the high sensitivity of this parameter and the prediction of n = 2 (which is consistent with the literature). This provides us with a good degree of confidence in the optimized model parameters.